What is Liver Qi Stagnation?

Keep the balance with a little acupuncture

What is Liver Qi Stagnation?

Who really considers their liver? Is it just a wedge-shaped spongy organ that somehow soaks up alcohol and squeezes out blood and digestive biochemicals? An imperfect champion of modern life, buffering us from the burden of late-night fries and whiskey, only to be guiltily appeased with salads and fresh juices the next morning? What is this being with whom we have such a tumultuous relationship? It is time to get to know the value of the liver according to Chinese medical theory.

Chinese medicine has a long history of placing the functions of the body into analogical frameworks that help make light the complex ideas of functional relationships between organ systems.

Read more about the Liver, here

Physiologically, the liver embodies the decisive aspect of a military general, in setting up the preconditions for the correct functioning of nearly every organ system. For example, the liver is related to blood pressure via its synthesis of albumin, the blood plasma protein that helps balance oncotic pressure, which ultimately influences systemic blood pressure. The liver stores and releases important vitamins, minerals and glucose; metabolizes hormones; synthesizes proteins; detoxifies various metabolites; and secretes biochemicals vital to digestion such as bile.

These functions allow the entire body to function correctly, and in a broad Chinese medicine sense this can be understood as governing the directional movement of Qi through the organ systems- to allow Qi to enter and exit the organs, stop and start metabolic processes, raise or lower pressure.

By allowing the correct movement of Qi through the body, the liver consequently governs the movement of blood, in a similar way to an army getting supplies and forces to the right people at the right time. The basic momentum of the blood is managed by the heart, but the usage of blood by any organ system is controlled by the liver.

So when you digest that heavy meal, blood gets shunted to the digestive organs; when you run, blood is made more available in the legs and lungs; when you sleep, blood retreats back to the liver for processing, allowing the liver to perform over 500 functions in the body.

According to Chinese medical theory, the liver Qi can become “bound up” by strong emotions, which physically inhibit its smooth functioning. Conversely, if the liver is physically injured or obstructed (say with fatty liver or even the blockage of the diaphragm), this causes a tendency toward angry outbursts, in the body’s attempt at removing obstruction with a forceful outpouring of energy. 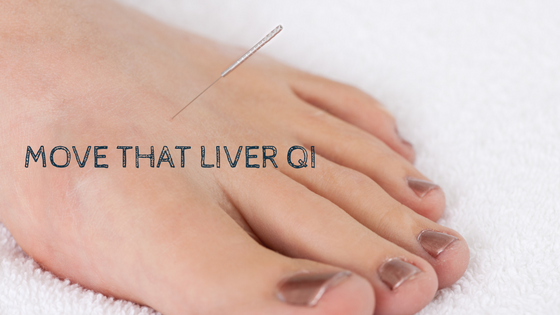 Acupuncture Point: LV3, located in the web between the big toe and 2nd toe. Job is to move and soothe the liver qi.

Although this may sound like a stretch, consider the act of sighing. The liver sits just under the diaphragm physically. When the liver is obstructed by emotional tension, one begins to heave a heavy sigh to move the diaphragm and hence force the liver to move as well. It is no coincidence that a heavy sigh indicates a release of emotional tension. In this way we move our livers so our livers can “move” us, move our Qi and move our blood.

Liver Qi stagnation affects a large number of body processes, and it makes all of them less efficient. When the liver system is constantly challenged and bound up with stress, what follows are more severe imbalances of digestion, blood pressure, hormonal expression, blood sugar regulation and mood. This can cause muscle tension and pain, anxiety and/or depression, accumulation of fat, insomnia, menstrual cramps, low libido and more.

The correct movements of the body based on the “planning” action of the liver ultimately create a harmony of action of the body that nourishes a positive sense of self that allows stressful situations to be dealt with and not “held on to.” When one holds onto stress after the moment has passed, the smooth coordination of the planning process is interrupted; but as we all know, when one part of a carefully organized plan goes awry, it throws off the timing of the rest of the plan.

The modern condition of “decision fatigue” contributes directly to the binding up of activity of the liver system in a similar way to the “decision paralysis” that occurs when we have too many options or cannot decide. We go into fight or flight mode, release a bunch of stress hormones, and then stew in them because of the organ system responsible for clearing out and metabolizing these stress hormones, the liver, is the one being most strongly impacted by our emotional response.

Another catch-22 of the liver system is that things like alcohol and fatty foods do tend to relax our minds and do technically ‘soothe’ the liver in small amounts. The prescription of medicinal wines are a perfect example of this; as is eating liver pâté to support liver health. However, these same substances in too large of quantities will injure the liver itself, disallowing their further use as a liver-supporting substance.

Ultimately, a little liver Qi stagnation is to be expected in modern life, and we all enjoy a bit of challenge to keep things interesting.

But, the higher the daily stress level, the more important it is to unwind this ‘bound’ Liver Qi. Allow the conscious or subconscious expression of emotion via playing sports, artistic pursuit, meditation, taking an extra long time to enjoy a healthy meal with friends, or in the most medically immediate way- seeing your acupuncturist for acupuncture, Chinese herbal medicine, cupping, and massage.

Ellie Heintze, ND, LAc, is a naturopathic doctor, licensed acupuncturist, and author with a private practice in Bothell, WA. She is the creator of The Food Allergy Formula, an online course, as well as the author of “A Starting Point Guide to Gluten-Free Living and Healthy Digestion” on Amazon.